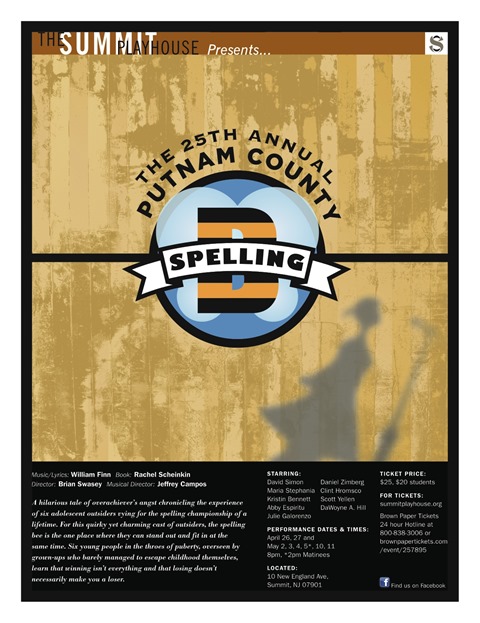 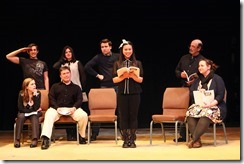 THE 25TH ANNUAL PUTNAM COUNTY SPELLING BEE is a hilarious tale of overachiever’s angst chronicling the experience of six adolescent outsiders vying for the spelling championship of a lifetime.  Six young people in the throes of puberty, overseen by grown-ups who barely managed to escape childhood themselves, learn that winning isn’t everything and that losing doesn’t necessarily make you a loser. (Photo: Sandra Nissen Photography; poster design by Ed Walter)

About the Summit Playhouse
Since its founding in 1918, the Summit Playhouse has produced over 300 productions, making it one of the oldest continuously operating community theaters in the United States. The historic institution is devoted to maintaining the practice of theatre arts and encouraging those interested in all aspects of the performing arts and its operations. The Playhouse presents three shows a year: a Fall show in October and November, a Winter show in February and March, and a Spring show in April and May. During the Summer, Kaleidoscope theater for youth, presents a production for - and with! - students. The Playhouse is located off Springfield Avenue, just west of the Summit business district. The Playhouse’s original stone  structure was constructed in 1891 and housed Summit’s first library.