Quick! Someone call the police and tell 'em to get on over to the Chatham Community Playhouse where wholesale identity theft—nay, grand larceny—is currently being committed! A raucous performance of Shakespeare's The Taming of the Shrew is shaking the little black box theater to its rafters!

If you're as much of a farce fanatic as I am, you'll want to feed your addiction with this, the first of Shakespeare's plays (and one probably never performed in his time) that has delighted stage (and film) audiences for decades, been turned into a Broadway musical and has been set in as widely varying locales as Renaissance Italy and America's Wild West. Whatever its iteration, this comedy never fails to enchant. 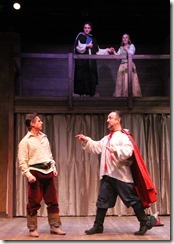 This time out, the Chatham Community Players go the traditional route, with a row of ochre-hued stucco façades, a balcony and a curtained area (much like the original Globe Theater, one imagines) designed by Robert Lukasik and simple but appropriate 15th-century costumes designed by Beverly Wand. Jen Plant's taut, strong direction has the actors using five entrances/exits, indulging in lots of physical comedy and demonstrating facility with the language. Memorizing dialogue in the American vernacular can be daunting; kudos to these thespians for committing to memory and getting their tongues around the Bard's vocabulary! (L-R: Chip Prestera, Scott Tyler, Glen D. Post, Kristin Bennett)

The plot is simple although its execution is convoluted: Baptista Minola decrees that his favorite younger daughter, the beautiful, docile Bianca, cannot wed until her older, waspish sister Katherina is married. Enter arrogant Petruchio, who agrees to woo the shrew in return for a more than generous dowry. After some high jinks involving mistaken identities, suitors in various disguises and pitched physical battles, Petruchio is smitten, Kate is tamed, Bianca is married to her young swain and all live happily ever after.

In this male-dominated play, the young and very handsome Derick Loafmann is comfortable with Shakespeare’s dialogue and very good at physical comedy. He could have laid on the man's arrogance a bit more, though. Scott Tyler is fine as Lucentio, the student whose instant attraction to Bianca sets the convoluted plot in motion. He and Glen D. Post as Tranio, the quintessential servant smarter than his master, deliver their lines naturally and convincingly, and their expressive faces elicit much laughter as they play to the audience. As Bianca’s doddering suitors, Gremio and Hortensio, Robert Dumpert and Chip Prestera are terrific, and John A. C. Kennedy as paterfamilias Baptista Minola communicates the father's dilemma of dealing with two very willful daughters. With impeccable timing, Tom Drummer wrings every drop of humor out of Petruchio’s servant Grumio with his expressive facial contortions and witty asides. 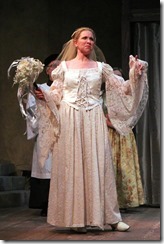 It's the female characters, who really drive the play, however. As the sweet Bianco, Kristin Bennett displays a brattiness that makes her older sister’s shrewishness comprehensible. Watch her stick out her tongue at her sibling when she gets her way and lay on the sweetness even more to wind her father and her suitors around her little finger—after she’s stuck it in Katherina’s eye! As the so-called shrew, Elissa Strell Kachtan (right) attacks her role with gusto, lots of yelling and stamping of her foot, but she doesn't elicit much audience sympathy for the woman. Because her father ignores her in favor of her younger sister, Kate ascribes to the axiom that negative attention is better than no attention. We need to glimpse the vulnerable side of this young woman for the comedy to work and to root for her success. For the final scene, Director Plants sticks to the traditional Elizabethan world view, with Kate becoming a docile bride, who counsels her newly married sister to put her hand beneath her husband’s foot as a gesture of obeisance. No liberated woman she! (I've seen the scene performed with Kate surreptitiously winking at the audience to show us she's just playing along.)

The physical comedy, a vestige of the commedia dell'arte tradition, works quite well in this production. The two sisters really have a go at it, with Katherina tying Bianca’s hands and flinging her back and forth around the stage, and Petruchio has a grand time terrorizing Kate after the wedding, until she’s starved for food and sleep.

As one of Shakespeare’s most accessible comedies, The Taming of the Shrew is a good introduction to his work and lives up to its reputation as one of the Bard's most beloved plays. The rollicking production at the Chatham Community Playhouse reminds us that the battle of the sexes transcends time and place.