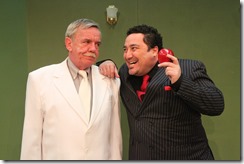 TWIST OF FAITH
By Richard Fink
Directed by Gerry Appel

WHEN: March 15 until March 24. Performances are Friday evenings at 8 PM, Saturdays at 8 PM and Sundays at 3 PM
WHERE: Playhouse 22, located at the East Brunswick Community Arts Center at 721 Cranbury Road, East Brunswick.
TICKETS: $12.00 and are available online at Playhouse22.org, by calling the Box Office at 732.254.3939 or at the Box Office window.

Twist of Faith is a new, original, zany, fast-paced play that features God and the Devil wagering over the eternal fate of a church-going accountant and his family. Once the bet is made, all hell breaks loose. It's going to be a tough week at the Hendricks’s house. (Above L-R: John Devennie as "God" and Damian Muziani as "Devil")

“People come out to the theater because they want to see something different. First productions of new works are rare and that makes Twist of Faith special," said Appel.  "The actors get a chance to put their stamp on the show and the audience has the thrill of seeing something new, funny and off the wall.”

Playwright Richard Fink summed up the show, "Gerry and I have said that Twist of Faith is a screwball comedy that will make a believer out of anyone. That's true because the show is about every day people thrown into an out of control situation that abruptly changes their lives. That type of thing happens to lots of people in the real world, although God and the Devil are not behind it. Or are they?"

Twist of Faith is part of the Playhouse 22 On The Edge series, a regular feature in their season of plays and musicals. The series demonstrates the theater's commitment to new writers and plays that bring fresh perspectives to the stage.