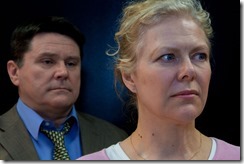 WHEN: March 22 and 23 at 8 PM and on March 24 at 3 PM
WHERE: Black Box Theater located in the New Jersey School of Dramatic Arts campus at 593 Bloomfield Avenue Bloomfield
TICKETS: $15 and can be purchased online at http://www.brownpapertickets.com/event/347663 and at the door with limited seating at each performance as the theater seats 44 people

What do a man, a woman, a ghost and a divorce lawyer have in common?  The answer can be found by watching the first production from the Rising Curtain Theatre Company of Bloomfield. The play written by Oscar-, Pulitzer- and Tony Award-winning author and playwright, John Patrick Shanley, will have the audience rolling with laughter as the characters look to make sense of their lives while seeking to find love and a sense of belonging in the process. (Above L-R: Einar Gunn of Clifton, and Beth Baur of West Orange; photo by Mick Guyre)

This first production will be directed by actor and New Jersey School of Dramatic Arts (NJSDA) Associate Director, Ted Wrigley. The cast includes Einar Gunn as Sidney who has previously performed in A Man for All Seasons; The Little Foxes and The Misanthrope for The Shakespeare Theatre of NJ.  Bonnie Rosenbaum as Celeste just completed a run of Kennedy’s Children as Wanda at the Producer’s Club Theater in New York. Mark Badaczewski as Henry has recently performed the role of Romeo in Romeo and Juliet at the Pax Amicus Castle Theatre. Walter Werner as Tommy studied at the New Jersey School of Dramatic Arts and was in Tarantino Effect part of the NJSDA Class Acts Showcase. Beth Baur as Marcia Marie is the co-director and founder of New Jersey School of Dramatic Arts  Beth has performed Off-Broadway, in national tours, in regional theater companies, in network commercials and corporate industrial films, as well as voice-overs.  The cast also includes current NJSDA student Katie McFadden as Natalie.

This is the first production of the Rising Curtain Theater Company. The Board of Directors is comprised of graduates and friends of The New Jersey School of Dramatic Arts who want to offer an opportunity for those who wish to further their acting, directing and writing experiences to have a local theatre company to work with.