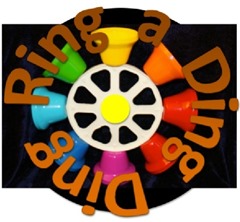 This rare performance of Theatre for the Very Young is an immersive, interactive and multi-sensory experience geared specifically for children three to six years old and their families. Ring a Ding Ding tells the tale of Alice, who searches for her lost dog and finds helpful friends along the way: around town, over the seas, and all the way to the moon.

Founded in 1981 with the stated purpose of “challenging accepted definitions of theatre and audience,” Oily Cart was named “one of the great British theatre companies of the last twenty-five years” by Lyn Gardner of the Guardian Unlimited, who attributed the company’s somewhat perplexing under-the-radar status to its exclusive focus on “work[ing] entirely with children, many with complex disabilities, and often behind closed doors in special schools.” According to their website, Oily Cart uses “hydro-therapy pools and trampolines, aromatherapy, video projection, and puppetry together with a vast array of multi-sensory techniques… [to] create original and highly specialized theatre” for young people.

The original Oily Cart production of Ring a Ding Ding, written and directed by Tim Webb, was designed by Claire de Loon, and featured music by Max Reinhardt. It toured the United Kingdom December 2011-February 2012. Writing for The Stage, Lisa Martland called the show “a visual treat which involves its eager audience in every step of the storytelling process.” Caroline McGinn of Time Out awarded the show five stars (the magazine’s highest rating), citing Ring a Ding Ding as “a beguiling aesthetic experience, scaled to fit [children’s] curious world and perfectly designed to make them happy.”

Kean’s Department of Theatre has a longstanding tradition of providing quality theatre for children, producing a touring production geared specifically for young people every spring, and typically alternating between high school and elementary/middle school audiences.  Ring a Ding Ding, which will be available to tour after its performances conclude at Kean, marks the first time the Department has reached out to a pre-elementary audience. “This year's Theatre for the Very Young tour is a first for us,” explained Department of Theatre Chair Holly Logue. “Rachel [the director] has developed a particular passion for this age group, and encouraged us to expand our touring to include 3-6 year olds.  We are delighted to be part of a theatre movement that seeks to engage children at this early developmental stage.”

While the most tangible representation of what the Department of Theatre students have learned may be the performance itself, Logue was quick to point out that the entire process is an education. “The touring show provides our students with a comprehensive theatre production experience, in which they not only create and rehearse the production, but design and construct scenery, costumes, props, and sound; publicize and book the tour; and head out as a team in April and May to bring theatre to the various constituencies,” said Logue.  “Our outreach efforts serve many purposes, not the least of which is bringing theatre to the schools, some of which are experiencing financial cutbacks in the arts, making it all that much more important."

The production will be available to tour April 7 through May 8; to schedule a touring date, please call Rachel Evans at 908.737.4429.