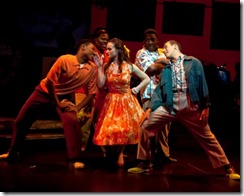 WHEN: SUNDAY, APRIL 7th; Open singing auditions will begin at 1:30 PM and open dance auditions begin at 3:30 PM
WHERE: Lackland Center, located at 715 Grand Ave in Hackettstown on the campus of Centenary College(left: Courtesy of New Jersey Youth Theatre from 2012 production of Smokey Joe's Café at Centenary Stage Company)

Actors/Actresses for various Sharks and Jets, can be of all ethnicities, but must have strong dance training.

Ensemble Singer/Dancers, again can be of all ethnicities, and preferably should have strong dance training.

Please bring sheet music from a Broadway Musical in the correct key and a photo. Auditioners are welcome to sing a selection from the show.

REHEARSAL SCHEDULE: Friday and weekends only from May 18-June 15 and then 6 days per week from June 17-July 17 with rehearsals between Westfield Community Center and NJYT studios in Roselle Park.

PERFORMANCES will run July 18 – 28 at the Bickford Theatre and August 2-11 at the Centenary Stage Company.

In 2003, NJYT’s production of West Side Story won the Music Theatre International’s Award of Excellence, an award rarely given out and only once in the ensuing ten years. The show is a musical masterpiece that set a standard of excellence in American musical theater seldom, if ever, achieved since. The original stage production opened in 1957 with powerful direction and choreography by Jerome Robbins, lyrics by Stephen Sondheim, book by Arthur Laurents, and a musical score by Leonard Bernstein featuring now-legendary songs such as "Tonight," “Maria”, "Something's Coming," "Somewhere," and "America.

Based on Shakespeare's Romeo and Juliet, West Side Story takes place in New York City. Two idealistic young lovers find themselves caught between rival street gangs. The couple struggles to transcend their world of hate, violence and prejudice. Though their struggle fails, their love forces the gangs to face the tragic