The first quarter of the year is a busy time, what with Martin Luther King, Jr. Day, Presidents' Day and Black History Month. The first we commemorate with reverence, the second with shopping, but I can think of no better way to mark the third than by heading over to the Westminster Arts Center in Bloomfield, where 4th Wall Theatre is performing Having Our Say: The Delaney Sisters' First 100 Years and join the centenarian Delany sisters in celebrating their beloved father's birthday and hear them recount the momentous events of their very interesting—and inspiring—lives. 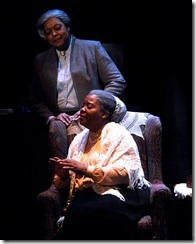 "Their first 100 years." Yes, you heard that right, for Bessie is 101 and Sadie is 103 at the time when an interviewer has come to inquire about their lives in preparation for a book. They are only too pleased to talk to someone new: "Everyone we know is either dead or boring us to death!" exclaims Sadie. As they tell their stories, feisty Bessie (sharp as "vinegar" and a "naughty darky" as her sister dubs her) keeps on interrupting her more docile sister Sadie (a Mamma's child, sweet like "molasses," according to Bessie) or one finishes the other's sentences so that there is never a lull in the conversation. In fact, the two women talk while they work preparing dinner in the little kitchen stage right or setting the dining room table with their mama's china and crystal stage left.

And what a journey they take us on! From the slave origins and subsequent ordination of their father and the mixed-race heritage of their mother through Reconstruction and their childhoods at St. Augustine school in Raleigh, NC; to encounters with Rebby Boys, Southern white racists given to lynching Negroes for no reason other than the color of their skin; through Jim Crow South to Harlem in the 1940s and the Civil Rights era, Bessie and Sadie have lived full, exciting lives. They have been "good citizens of a country that has not always been good to" them. The backbone of their family has been their religious faith, and education was always the number one priority of their parents and the 10 children in the Delany family. The two women certainly fulfilled the latter goal: Bessie graduated from the Columbia University School of Dentistry and practiced for over 50 years in New York City while Sadie studied Domestic Science (more familiarly known as Home Economics) at Pratt Institute and became the first "colored" teacher of the subject in a New York City high school (she went on to earn a Master's Degree at Columbia University)! And although each had many beaus, the sisters never married; they'd rather be called "maiden ladies" than "old maids," indicating that they alone chose their single state.

Mimi Francis (Sadie, right) and Gwen Ricks-Spencer (Bessie, left) turn in tour de force performances, ably helmed by Jeremy Gold Kronenberg on a marvelously evocative and intimate set designed by Jasmine Vogue Pai and lit by Nicholas Von Hagel. The two actresses deliver the massive amount of dialogue naturally and convincingly as though taking us into their confidence. They even call the audience "child," as though we are the young white woman who has come to interview them (Amy Hill Hearth, the author of the book from which the play has been adapted by Emily Mann). The actresses move and walk like elderly women, even when changing scenes; they never break character. Just as impressively, in the miniscule kitchen set, they conduct a complicated dance as they cut cucumbers and carrots, season chicken, stud a ham with pineapple and cherries, and move between the sink, refrigerator, oven and counter! It's a testament to their commitment and professionalism that Francis and Ricks-Spencer neither trip nor bump into each other as they talk! 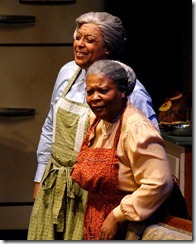 The love the two women have for their parents and siblings is evident throughout the performance and in the photographs projected on three frames behind them. What a beautiful family and how lucky we are to see them in the flesh! I especially love the photos of the real Sadie and Bessie that appear during the curtain call.

Kudos to whoever chose the music to accompany the performance; Fats Waller, Duke Ellington, Ella Fitzgerald and more black musical titans set the scene beautifully. Janice Schopper's costumes are terrific and apt, as are the props chosen by Robert Lavagno to decorate the set and the hair styles designed by Brian James Grace.

Having Our Say may be a tribute appropriate to Black History Month, but it speaks of universal truths applicable throughout the entire year: strength to pursue one's dreams in the face of racial and economic obstacles, tenacity, optimism and, above all, dignity of the individual regardless of race, color or creed. You will have one more chance to catch this marvelous production: Saturday night at 8 PM. Take your teenage children for a wonderful history lesson and a grand introduction to the theater. Bravo, 4th Wall—Theatre on the Edge!

Having Our Say: The Delany Sisters' First 100 Years will be performed at the Westminster Arts Center, Franklin Street, Bloomfield . For tickets, call the box office at 973.748.9000 ext. 1279 or visit www.4thwalltheatre.org.