“Donna McKechnie still embodies the musical-theater ‘triple threat’ ideal: she can belt and warble with the best of them, her acting is precise and appealing, and her dancing remains expressive and beautifully shaped.”—Chicago Reader 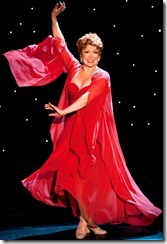 WHEN: Saturday, March 16, at 8 PM
WHERE: Sitnik Theater at the Lackland Center, 715 Grand Avenue, Hackettstown
TICKETS: $35 in advance and $40 at the door

Audiences will not want to miss this one-woman theatre extravaganza from legendary Broadway star, Donna McKechnie. Centenary Stage Company is proud to welcome this true triple threat performer to present her one woman cabaret show,an autobiographical musical celebration of song, dance, and storytelling, with music by some of Broadway’s most celebrated composers, including Stephen Sondheim, Marvin Hamlisch, Cy Coleman and Rodgers and Hammerstein, as well as more contemporary composers, like Ann Hampton Callaway. The Tony Award-winning star of A Chorus Line is regarded internationally as one of Broadway’s foremost dancing and singing leading ladies. McKechnie has performed extensively on the concert stage, in cabaret, with symphony orchestras and now brings her talents to the Centenary Stage. (Photo Credit: Kurt Sneddon with Blueprint Studios)

Her cabaret show, My Musical Comedy Life, which received unanimous raves from New York theater critics, won a Mac Award Nomination for Best Female Singer and the Backstage Bistro Award for Outstanding Major Engagement. McKechnie talks and sings about her life and career which began when Bob Fosse put her in the chorus of the 1960 production of How to Succeed in Business Without Really Trying. In between were several legendary collaborations with Michael Bennett, which included the 1976 classic A Chorus Line, in which she drew on her own experience to play an aging dancer desperate for a comeback.

In this autobiographical one-woman show, created with esteemed musical director Dick Gallagher, the red-haired, apple-cheeked McKechnie interweaves memories of her career with selections from a vast repertoire. Among them: a solo rendition of “You Could Drive a Person Crazy,” the Andrews Sisters-style trio that Stephen Sondheim penned for her; "If They Could See Me Now," from Sweet Charity; and "The Music and the Mirror," her signature routine from A Chorus Line. There's also a tribute to the Hollywood musicals that inspired her as a girl and an account of the night she met, and danced with, her idol, Fred Astaire. The New York Times says of Ms. Mckechnie, “With her bright, friendly voice, frisky body language and arsenal of backstage anecdotes, Donna McKechnie is a performer without pretensions.”

The Centenary Stage Company is a not-for-profit professional equity theatre, in residence at Centenary College, dedicated to serving as a cultural resource for audiences of the Skylands Region with professional music, theatre and dance events and arts education programs throughout the year. Performances at the Centenary Stage Company are made possible through the visionary support of the Geraldine R. Dodge Foundation, the NJ State Council on the Arts, and CSC members, friends and sponsors, including Premier Sponsor Heath Village, Silver Sponsors Hackettstown Regional Medical Center and The Holiday Inn in Budd Lake, and Series sponsors, Fulton Bank, and Mamas and Café Baci.

If you attend the event, tell them you learned about it from the NJ Arts Maven! Subscribe to get free daily updates!
Posted by Ruth Ross at 6:55 PM