If you think the Trayvon Martin-George Zimmerman debacle was a three-ring circus, then you know nothing about Leo Frank. That 1913 case involved a Yankee Jewish manager of an Atlanta pencil factory who was accused of killing a 14-year-old girl and hiding her body in the building's basement. Yellow journalism, witness tampering, mob mentality and crooked gubernatorial politics resulted in Frank's conviction and ultimate lynching at the hands of the Ku Klux Klan. It is a stain on the reputation of the South—and on our country.

To learn more about the tragedy of Leo Frank, I suggest that you get on over to the Westminster Arts Center in Bloomfield where 4th Wall Theatre is presenting a first-rate production of the Alfred Uhry-Jason Patrick Brown musical, Parade, which runs through June 23.

A sensational trial and a subsequent lynching doesn't appear to be a fit subject for musical theater, but while the glitz and glamour may be missing, Parade has human pathos and poignancy in spades. Add to that a complex, lush score, a gripping story and riveting performances and you've got the recipe for a tour de force production that should not be missed by anyone from 13 to 90.

Fifty years after the Civil War, Atlanta still celebrated Confederate Memorial Day with rousing parades (one opens the show; a parade after the lynching closes the show). This puzzles Northerner Leo Frank (left, the real Leo Frank) who can't imagine why anyone would celebrate such a resounding loss. In fact, he goes to work that day as on any other, an act that contributes to his ultimate undoing, for he was in his office when little Mary Phagan came to collect her week's pay—and was never seen again until her body was discovered under a pile of rags in the basement. Frank becomes a suspect because he is the quintessential Atlanta outsider: a Brooklyn native, a college graduate, a Jew come to the city to marry and manage his wife's uncle's pencil factory. His rather detached, somewhat arrogant demeanor, and high-strung personality don't help matters either; his hand-wringing nervousness and sweating are seen as indicating his guilt. Eager to get a conviction (and get the case out of his hair) the governor instructs the district attorney to get a conviction, and it doesn't have to another Negro this time. Horrific tales about Frank's preying on the young girls who work for him are told in court and printed in the newspapers, inflaming the mob. Even when Frank is sentenced to hang, the punishment is not enough. Several men, all of them prominent in Atlanta's business and social community, take matters into their own hands, kidnap Frank from the farm prison where he's incarcerated and lynch him. 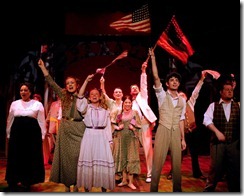 I have been reviewing 4th Wall Theatre for 16 years since its inception; they have produced many wonder-inducing shows, but Parade is far and away the most ambitious and the most successful. Director Bob Cline is a master at helming complicated show with large casts; the tension never lags, keeping us on the edge of our collective seat, finally weeping at the outcome. Evan Hill's set is minimal but functional; the tree limb hanging over the three scaffold-like platforms is an ominous presentment of what is to come. Victoria DePew's costumes evoke the era beautifully, especially the frocks worn by Lucille Frank and the buttoned-up suits sported by Leo Frank. Joe DeVito's sound and Nicholas Mammo's lighting further enhance the atmosphere of impending doom. And Markus Hauck's musical direction accompanies the actors and helps set the tenor of the proceedings without overpowering. (Above, celebrating Confederate Memorial Day at the beginning of the play.) 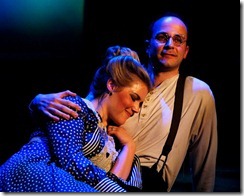 As for the actors' performance, kudos to everyone in the cast, from the two leads down to the minor parts. Danny Arnold resembles the real Leo Frank, complete with slight build, thick glasses, bulging eyes and slicked-back hair. His impressive performance includes a plaintive lament about living in the South ("How Can I Call This Home") and a statement he gives to the court against the advice of counsel. But perhaps the most heart-wrenching is a duet (left) with his devoted wife wherein he mourns the time they wasted before his conviction. The chemistry between Arnold and Sandy Taylor's Lucille is all the more palpable in that they are real-life spouses. Far from being the "mousy wife" (as Lucille is described in the newspapers), Taylor is a beautiful, elegant woman and an actress with a glorious voice. She may be mousy in demeanor at first, but she grows an iron backbone to defend her husband, telling the reporters that they don't know this man and declaring that all is not over even after Leo has been convicted. These two performances are well worth the price of admission.

Lisa Carter (above center) is adorable as Mary Phagan; she skips around the stage, teasing her would-be beau Franking (played by Vinny DuPree, above right)) and appears as a ghost in several other scenes to remind us that she was a real flesh-and-blood girl (I especially love the song "It Don't Make Sense," in which composer Brown tells us what she liked in life). Todd Shumpert's Governor Slaton, appropriately conflicted about the case, shows courage by commuting Frank's sentence, but it's too late.

The villains of the piece are Jordan Gulick as the D.A. Hugh Dorsey, hungry for a conviction (which will lead to the governor's mansion), tampering with witnesses, whipping up the crowd, extolling the glory of antebellum Georgia. David Simon is equally as odious as reporter Britt Craig, tired of covering the police blotter and seeing the Frank case as his savior. Uton Onyejekwe as the janitor Jim Conley is as slimy a character as ever lived onstage; in exchange for not being outed as a chain gang escapee, he agrees to finger Frank as the killer. And Bill Saunders as local politician Tom Watson behaves despicably, calling for the “hammer of justice” to bring about Armageddon.

An angry and ambitious musical, Parade had a brief run at Lincoln Center back in 1998 but won Tony Awards for Best Book and Best Score, along with six Drama Desk Awards. That the folks at 4th Wall Theatre have given it a local airing is testament to the troupe's fearlessness and the show's enduring themes of prejudice and justice. This is an important, albeit shameful, chapter in our nation's history, one that brought about the founding of the Anti-Defamation League, the Jewish Civil Rights organization and, sadly, a resurgence of the Ku Klux Klan.

In these times of political and social polarization, Parade is the perfect wake-up call. I suggest you catch this production before it closes. And take your teenagers, for they are the next generation to deal with injustice.

Parade will be performed Fridays and Saturdays at 8 PM and Sunday, June 17, at 3 PM at the Westminster Art Center, 449 Franklin Avenue, Bloomfield, through June 23. For information and tickets, visit ONLINE or call 973.566.WALL (9255).

(Historical note: in 1982, 83-year-old Alonso Mann, who had been Leo Frank’s office boy, told police that he had seen Jim Conley alone at the factory carrying Phagan's body but that Conley had threatened to kill him if he reported what he had seen. In 1986, the state of Georgia issued a pardon recognizing its culpability in Frank’s death but not exonerating the man. The men who lynched Leo Frank were identified in 2000 as prominent Atlanta citizens—a former governor, the son of a senator, a Methodist minister, a state legislator and a former state Superior Court judge—many of whose names adorn buildings, street signs, shopping centers and law offices in the e community. They were never prosecuted. It is widely believed that Jim Conley committed the heinous crime. Mary Phagan’s descendants still think Leo Frank is guilty.)