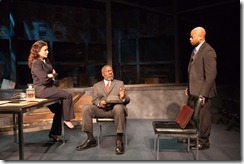 Reparation by Gino DiIorio tackles several thorny subjects, with racism, the involvement of America's white citizenry (especially in the North) in furthering the institution of slavery and parent-child relationships being the most prominent, and its attempt to juggle and integrate these themes into a well-made play produces, on the whole, mixed results. Fortunately, the world premiere production fluidly directed by Jane Mandel at Luna Stage provides a polished, accomplished interpretation of a work that could do with some trimming, some tightening up, and a sharper focus. (Above: Catherine Eaton, Frankie Faison, Shane Taylor engage in a show down; photo by Steve Lawler)

Most of us have heard the word "reparations" used in reference to the financial payments made by the German government to Holocaust survivors, but in this country the idea refers to payments made to descendents of African natives brought here to serve as slaves.

DiIorio's play involves the efforts of Aurora Investment Trust to purchase land for a development of luxury condos called Mineral Spring, a plot currently occupied by a dwindling black population living in several high-rise apartment buildings. With the deal languishing for decades, CEO Chrissy Aurora enlists former flame/Aurora employee David Burns to make one last offer. Several years before, he mysteriously left the firm under a cloud (and their breakup seems to have been acrimonious), but she has called him back because, she assumes that, as a black man, he will have greater rapport with the remaining tenants. Unfortunately, David's interview with black janitor/resident William Patterson reveals disturbing news: under a bricked-up, sealed-off airshaft lie the remnants of a slave cemetery called the Horn of Gabriel, a spot jealously and zealously guarded by William. Both Chrissy and David think that throwing money at the man will solve the problem, but William has other ideas. And David has information that will throw a wrench into the works. And therein lies the crux (and conflict) of the drama. 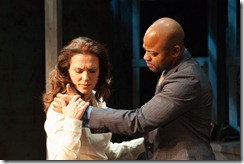 The cast Mandel has assembled does wonderfully well by the material, especially the snappy dialogue. Catherin Eaton's Chrissy is fierce, caustic, a woman you don't want to cross. She's a shameless master of manipulation, especially of David, even going so far as to play with (and reawaken) his affection for. Behind the tough gal facade, however, lurks a young woman who has run her father's company into the ground, a daughter who has never felt she was good enough/smart enough for her highly successful father. She mentions his name so often that we get the impression that a graveyard lies under Aurora, this one holding the remains of her father Nelson and those who came before him. Eaton is, at the same time, rather terrifying and terrified.  (Above: Catherine Eaton and Shane Taylor share a tender moment.)

As David Burns, Shane Taylor is caught between two worlds: that of the black man successful in a "post-racial" business society and a man linked by his heritage, background and skin color to those who made the Middle Passage. Out of work, he projects a yearning to get back in the game that can be tasted, yet he is out of his league up against Chrissy, a fact made evident in Act II.

And finally, Frankie Faison as William Patterson displays a sly, avuncular mien, leading David to misjudge him as simple but providing Chrissy with a worthy adversary. Faison communicates William's devotion to the land with warmth and passion, while he maintains the man's dignity and self-possession beautifully. But his characters is so ambiguous that it’s difficult to discern whether he’s a real person or a symbol.

Where Reparation falls short is in the script itself. It doesn’t help that, on his website, DiIorio bills it as a “romantic comedy.” I found that hard to believe although there are some funny lines. Too, DiIorio has William deliver two long monologues, one in the play's opening moments, telling us why he's stayed at Mineral Spring when his siblings have all decamped to other parts. It includes a recitation of a dream he has had over and over, the point of which will not become clear for several subsequent

scenes. The other monologue involves William's assessment of David's nonexistent relationship with his father (whom he has never met), but in fact, it is the story of many a young black man. (Left: Shane Taylor, Frankie Faison) Both speeches are a case of showing, not telling, and tend to stop the action in its tracks. Of the three characters, William is the most puzzling. For a man who has lived somewhere in the country for his entire life, the man's vocabulary and syntax sound too educated, too elevated, and his understanding of the machinations of Wall Street doesn't ring true. And the revelation involving the Aurora family comes very late in the action, and Chrissy's dismissive reaction is, as William says, "just another way of sweeping it under the rug." It gets very short shrift and almost becomes a throwaway detail. Finally, saying that the setting is a Northeastern city, without really connecting it to a slave cemetery (saying, "New York had slaves, too," just doesn't cut it), and then not linking it to the Aurora family secret misses a teachable moment. That said, the ending of Reparation will take your breath away, but these two wheeler dealers have it coming.

Superior production values once again reign at Luna Stage. Maiko Chii's set evokes the urban world of business and a broken-down cemetery that is the Horn of Gabriel; Rachel Budin's lighting helps the audience make the transitions easily. Oliver Lake's original jazz music is as haunting as the phantoms that live on the edge of the story, and Deborah Caney's costumes are entirely appropriate for a couple of power yuppie connivers; that the fabrics have a sheen to them conveys the sleaziness of their enterprise.

A finalist for the 2010 Yale Drama Series and winner of the 2011 E. Desmond Lee Prize given by the University of Missouri—St. Louis, Reparation has some important points to make, but judicious editing and sharpening the focus, especially the detail binding the three stories together, could make this play a real winner. As of now, it is an interesting drama that Luna Stage has given a world premiere-worthy production.

Reparation will be performed at Luna Stage, 555 Valley Road, West Orange, through March 11. For information and tickets, call 973.395.5551 or visit www.lunastage.org.

NOTE: In 2008, POV broadcast a program on the slave trade on PBS. CLICK HERE FOR MORE INFORMATION

Slave cemeteries have been found in Mahwah and Lamington, NJ.