Who would have thought to open Centenary Stage Company's silver anniversary season with a 63-yer-old comedy that's rarely, if ever, performed nowadays? Carl Wallnau, the company's Artistic Director, that's who. And he's made a great choice, for the sensational Light Up the Sky now onstage at the Sitnik Theatre on the Centenary College campus really does light up the sky over bucolic Hackettstown! 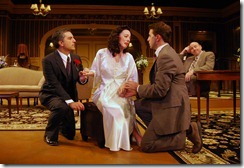 With scintillating (and very funny) dialogue and a satiric poke at the theatah, Moss Hart gives us a glimpse behind the scenes at what goes on when a new playwright's work opens its pre-Broadway run in Boston, something that seldom happens now when every work seems to go directly to New York without the tweaking and rewrites that used to occur out of town. At three different times —5:30 PM, 11:45 PM and 3:30 AM the following day—we meet the star, the director, the producer, the playwright of The Time Is Now and several hangers on in a posh hotel suite in Boston. The party's mood changes with the hours: ebullient before the opening night curtain rises, dejected after the curtain falls and the play appears to be a stinker and hopeful once the reviews come out. Along the way, each character reveals himself or herself to be petty, insecure and ultimately noble. Hart takes us on quite an emotional rollercoaster ride! (Above L-R: Eli Ganias as Sidney Black, Kirsten Hopkins as Irene,  Emilio Tirri as Peter, and Michael Irwin Pollard as Owen Turner; all photos by Bob Eberle) 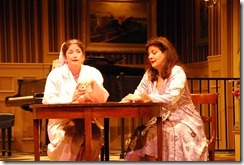 Because the characters are bigger than life (they are, in fact, based on real theater celebrities of the 1940s), and not written with nuance, the actors legally chew up the scenery, adding to the mayhem onstage. At the center of the group looms producer Sidney Black, owner of an ice show that stars his wife Frances. In an effort to make money and hobnob with culture, he has sunk $300,000 into this risky venture (wonder how much that would be in 2011). As Black, Eli Ganias fills up the stage whenever he appears, takes over every conversation, blusters and orders more laughs and schmaltz to be put into the script for the play to succeed; he's literally larger than life. His chutzpah is matched by the snazzy performance of Liz Zazzi as Frances, complete with working class Brooklyn accent, a smile that rivals the bling with which she adorns herself and huge eyes that see the world as it is, not as the others want it to be. Her strident recitation of Sidney's financial successes from investing in junk is priceless! Because they are outsiders and unfamiliar with the vicissitudes of the theater, the Blacks exude American optimism, which makes their bluster all the more endearing and real. (Above: Mikaela Kafka and Liz Zazzi playing gin rummy to pass the time) 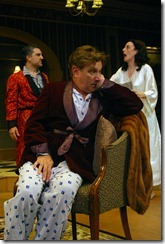 In contrast, those associated with the theater are as fake as a $3 bill. The director Carlton Fitzgerald, masterfully played by David Edwards, sobs at the drop of a hat, extravagantly extols "magic time" (the last three hours before a play opens to the public for the first time) and generally swans around the hotel suite with a great deal of affectation. Kirsten Hopkins is perfection as the always posing, high-strung star Irene Livingston who calls everyone "dahling" and while crying looks around to see if anyone's watching. An antidote to all these poseurs is Irene's straight-talking, bossy mother Stella, played with no nonsense and great comedic timing by Mikaela Kafka. John Little does a nice turn as Irene's husband Tyler, a man of Wall Street, not Broadway. He stands aside watching them all with amusement. (Above L-R: Eli Ganias, David Edwards, Kirsten Hopkins)

As two playwrights—one at the end of his career, the oth 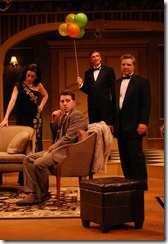 er just beginning—Michael Irvin Pollard as Owen Turner and Emilio Tirri as Peter Sloan provide a glimpse into what is entailed in writing a play. Pollard is appropriately world-weary and cynical; having written plays specifically as vehicles for stars like Irene, he's ready for a sabbatical. Tirri's Sloan projects an awe of the theater that's palpable and very funny given that the other characters are far more self-absorbed and petty than he gives them credit for. At first he's tongue-tied in their presence, but his big scene near the end of the third act reveals a passionate young man who's been mightily disappointed. (RightL-R: Kirsten Hopkins, Emilio Tirri, John Little, Eli Ganias)

Jonathan Turner is very funny as the Shriner, Gallagher, a businessman from Indiana just itching to sink some dough into the theater, and Kathleen O'Mara is sweet as Miss Lowell, the young woman who is helping Irene write her memoirs.

Moss Hart's homage to his beloved theater, Light Up the Sky is an equal triumph for Director Carl Wallnau. He keeps the action swirling, dipping and diving, from great highs to great lows and lots of comedic shenanigans in between, most of which occur toward the front of the stage, where they should be. Bob Phillips' set, an elegant hotel suite, provides the perfect "stage" for the backstage drama wrought by the actors, although it's a tad too brightly lit. And Julia Sharp's costumes lusciously fit the time and the characters who wear them.

At one time in the past, Moss Hart was a giant of the theater, and Centenary Stage's fine production does his comedic classic the justice it deserves. Along the way, Light Up the Sky says something important about, as director Wallnau puts it in his program notes, "the need for artists to feel value and worth. . . the impulse to create and the power of art to inspire artists to achieve the transcendent and pursue divine grace." And if that's too philosophical for you, go and laugh your head off!

Light Up the Sky will be performed at the Sitnik Theatre, 715 Grand Avenue, in Hackettstown through October 16. For information and tickets go to www.centenarystageco.org .