Luna Stage has done it again. Last season, this talented company turned The Tallest Building in the World's lessons about architecture and structural engineering into a dramatic tour de force. This, the second season in their new Valley Arts District home, repeats the theatrical experience with The Dangers of Electric Power by Ben Clawson, a production not only perfect for West Orange but a must-see for the entire north Jersey theater-going community.

The World Premiere of a play Luna Stage commissioned and perfected over the past two years, The Dangers of Electric Lighting posits a meeting between two giants of invention, Thomas Alva Edison (above) and Nikola Tesla? You've never heard of Tesla, you say? Well, by the time the lights go down, you'll understand that his contributions are as important as Edison's light bulb in particular and electricity in general. 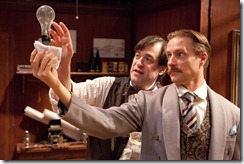 Fresh from his job as an engineer for the Continental Edison Company, where he improved equipment brought from the United States, Nikola Tesla arrives at Edison's laboratories with a letter of introduction written by his former employer, Charles Batchelor, who happens to be a great friend of Edison's. Offered $50,000 by the Wizard of Menlo Park to repair the two dynamos on the S.S. Oregon that were supplying direct current to light up lower Manhattan, the young engineer is dismayed to find that the offer is not genuine, merely an example of American humor. This trick sets in motion the rivalry between the two geniuses, made especially more pointed because Tesla suggests using alternating current (AC) instead of direct current (DC) so that households over a wider area can enjoy the benefit of electric light. Edison disagrees vehemently, on the basis that AC is too dangerous to use (a person touching an AC wire can be "fried," he says), and the “War of the Currents” is on. Each man lines up supporters; Tesla attracts the attention of George Westinghouse while Edison engages in a negative and disturbing campaign to discredit Tesla's idea. 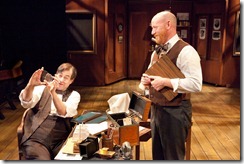 With his expansive face and substantial build, James Glossman (above left) resembles the portraits of Thomas Alva Edison. When we first meet the character, his playful manner and delight in "jokes" make him a likable character. But when his ideas are questioned, Glossman lifts the good-natured veil to reveal a man who does not like to be questioned, who believes he's right and who will do almost anything to control the electric lighting business. It's not a flattering portrait, but Glossman’s superb portrayal of the American giant makes us want to side with him, if for loyalty alone.

Jon Barker's lean, tightly wound Nikola Tesla (top photo, right), arrogant upstart that he is, doesn't make for a very sympathetic character, but Barker's wonderful performance matches Glossman’s, making the battle a riveting affair. Tesla aims to win through industrial means, teaming up with Westinghouse to use AC to transmit electricity over long distances, but as Edison (with his proxy a dude named Harold Brown) uses bizarre experiments and negative pamphlets to win, our sympathy for him diminishes. It's difficult to take your eyes from Barker whenever Tesla is onstage. 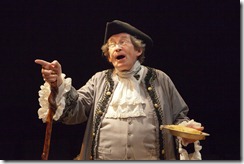 Joseph Langham is equally as great as Edison's associate and friend Charles Batchelor (above right), supporting his boss but showing the man's doubt as Edison's intransigence leads him to questionable behavior. B. Brian Argotsinger is appropriately weasely as Harold Brown, Edison's acolyte who performs the dubious task of the great man's proxy in proving the danger of AC. And Frank Anderson is fine as Ben Franklin (above right) and George Westinghouse, the first Edison's idol and the second his nemesis.

John Henry Davis's taut direction keeps the tension high and our interest in what could be a dry subject at a consistent high. Andreea Mincic has designed a set that transports us to Edison's lab library in West Orange; Paul Hudson's lighting makes sure our attention is smoothly directed to various venues; and Deborah Caney's costumes suit the characters very well. Randall Eng's incidental music sets the scene at the beginning and end of the play, and Damien Hennessy's sound is excellent, especially in the scenes where experiments are conducted on living things.

Ben Clawson's script is a marvel at conveying scientific theory, delineating character and ramping up the conflict so necessary for drama's success. My only complaint is that the play is a tad overwritten, especially in the scenes when Franklin appears to Edison; they are somewhat confusing and interrupt the rhythm.

So what happens when the “war of the currents” ends? Well, you'll have to go on down the Valley Arts District in West Orange to discover the "darkness [that] lurks on the road to light." The outcome of this intellectual "battle" affects modern life in surprising ways. Come be amazed by the subject, the play and the performances!

The Dangers of Electric Lighting will be performed Thursdays at 7:30 PM, Fridays and Saturdays at 8 PM and Sundays at 2 PM through November 13 at Luna Stage, 555 Valley Road, West Orange. For information and tickets, call 973.395.5551.