REVIEW: “MUCH ADO ABOUT NOTHING” @ TWO RIVER THEATER COMPANY

The Italian sunlight is brilliant—almost blinding—in the lovely production of Shakespeare's romantic comedy, Much Ado about Nothing currently gracing the stage at the beautiful Rechnitz Theatre in Red Bank. I have seen this play about ten times, and this is one of the most beautiful and funniest performances I've ever experienced.

This time out, Director Sam Buntrock has set the play in an indeterminate year in the 1930s on the terrace of a family palazzo, the home of Leonato, the powerful governor of Messina, Sicily. The idyllic mood set before the performance formally begins—Leonato strolls out on the veranda, tidying up a bit before sitting down to read his newspaper as his daughter Hero practices her lessons on the piano—is broken by the appearance of soldiers, worn out from physical battle but not too fatigued to indulge in the age-old war between the sexes. 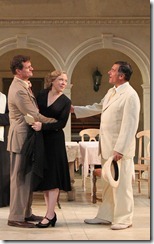 Much Ado about Nothing tells the story of two sets of lovers, the battling Beatrice and Benedick and the more docile, but ultimately as volatile, relationship between her cousin Hero and his buddy Claudio. The entire play turns on misunderstandings and misinterpretations to much hilarity and sadness. Will Beatrice and Benedick get together despite their apparent distaste for each other? Will Hero’s sullied reputation be restored, and will she wed Claudio? Will the villains who perpetrated the hoax sundering their marriage be brought to justice? These are just some of the questions Shakespeare poses and answers before the final wedding dance restores order and harmony, as all good Elizabethan comedies must do (right).

In his inimitable fashion, Shakespeare welds the tragic to the comic. When the wedding of the smitten captain Claudio to Leonato’s lovely, naive daughter Hero is sadly derailed when he repudiates her at the altar, believing that he has seen her talking with a lover at her bedroom window the night before the wedding, she collapses, near death. Conversely, high comedy reigns when both Benedick and Beatrice are deceived by overheard conversations in which friendly conspirators proclaim that Beatrice really loves Benedick and vice versa. The shenanigans and misuse of the English language by Constable Dogberry and his fellow watchmen further contrast with these high-minded goings-on and provide even more hilarity. In the end, however, all ends well, and the audience is ruefully reminded that there’s been “much ado about nothing.”

As Beatrice and Benedick, Kathryn Meisle (right) and Michael Cumptsy (left) look a tad long in the tooth, but reservations are swept aside as the two trade witty wisecracks meant to show that neither is interested in the other. Cumptsy's expressive face makes his delivery all the more comical; he preens and stalks around the stage as one very much enamored of himself. Seeing this big man hide under a table and behind a planter is very funny, and the speech in which he finally declares his live for Beatrice is deliciously rueful.

Dressed in rather mannish garments, Meisle's Beatrice fails to convey the soft side of her character so necessary to understand her behavior toward Benedick. She glosses over the fact that he broke her heart when the regiment stopped in Messina en route to the war in Spain, reciting that speech to Don Pedro so quickly that it's not clear how much she was hurt. Her quick and rather brittle delivery makes the character not as likable as Cumptsy's. However, she shines at Hero’s wedding when she weeps real tears at her cousin’s humiliation and death. 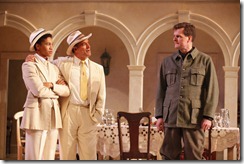 As Leonato, Tom Bloom is avuncular at the outset and appropriately (for the era) outraged at the news that his daughter has behaved in an inappropriate manner. Steven Skybell is terrific as the regiment's commander, Don Pedro; his idea of having a bit of fun at the expense of Benedick and Beatrice's stiff-necked attitudes toward love is infectious! Sean Dugan's scowling face and skulking manner mark the a self-proclaimed “plain-dealing villain” Don John as a man to be reckoned with. As John's plotting henchman Borachio, Christopher Hirsh could be a bit more malevolent; the motive for his behavior is unclear, and the performance doesn't do much to make it believable. (above: Aaron Clifton Moten, Steven Skybell, Michael Cumptsy) 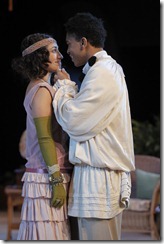 Unfortunately, the two stock lovers, Hero and Claudio, are given short shrift by the performances of Annapurna Sriram and Aaron Clifton Moten (left). These two characters aren't very complex, for they represent youthful, besotted love. Both actors tend to underplay this giddiness, Moten more than Sriram. His flat, almost diffident delivery makes his attraction and full-blown, ecstatic adoration for Hero underwhelming. She is far too laid back to convince us she really cares for Claudio, but she believably breaks down when her virtue is falsely besmirched. Because these two characters are supposed to be foils for Beatrice and Benedick, their lackluster performances take the edge off the swipes taken by the un-lovers.

Thankfully, actors portraying the lower-class characters come to the rescue of the plot and the production. John Ahlin is deliciously hilarious as the self-important Constable Dogberry, he who mangles the English language with great élan. He's ably abetted by Connor Carew as his partner Verges, who overhears Borachio boasting of the plot and helps bring the malefactors to justice.

Director Buntrock keeps the action humming along at a good clip so that the two hours seems to fly by. Mattie Ullrich's costumes are almost characters in the play, that's how stylishly elegant they are! Lots of white suits and dresses (except for Don John and the rustics), although I wished Beatrice had worn more feminine attire (at least a dress from time to time instead of trousers and at one point, a tuxedo). Brian Tovar's lighting design conveyed the Italian sun and the passage of time very well.

Much Ado about Nothing has been called Shakespeare's most perfect play so it's pretty difficult to mess it up. With high wit and rustic humor, Buntrock and Shakespeare remind us in the space of two hours that love can make us foolish, wound us, transform us and ultimately make us whole if we give in to it. Despite a few glitches, Two River Theater Company's nifty production is a reminder of the Bard's genius and provides an entertaining respite from the gloomy talk of budgets and debt ceilings. And take your teenagers: This is a grand introduction to Shakespeare for the young!