REVIEW: “THE LAST DAYS OF MICKEY AND JEAN” @ THE BICKFORD THEATRE

The familiar adage, "Things are seldom what they seem," is nowhere more true in Richard Dresser's droll comedy, The Last Days of Mickey and Jean, not being performed at the Bickford Theatre in collaboration with Playwrights Theatre of New Jersey and the Old Castle Theatre Company of Vermont. Although the plot has several large holes in it, the stellar performances of the three cast members make for an entertaining riff on loyalty, love and the choices we all must make. 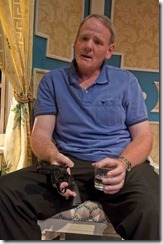 At first glance, Mickey and Jean appear to be typical American tourists at the tail-end of a long vacation, tired of traveling, longing for home and sick of spending every moment together. But as playwright Dresser peels the layers peel, we learn that the two have been on the lam—for seven years!—trying to evade the authorities and other interested parties who seek justice for the 19 murders Mickey has committed in his long criminal career. Mickey's paranoia is fueled by a Fiat that roars past their hotel at the same time each afternoon. Bobby, American banker Jean meets at a cafe outside the Louvre, turns out to be less the lonely nebbish and more a conniver seeking retribution for a wrong done him by Mickey. And facing a suicide pact, Jean reveals secrets she's kept for the long time she and Mickey have been together, finally revealing herself to be even more clever than the two men, finally making a choice that will help her transition into an independence she's never experienced before.

Jeff Knapp's use of French melodies played on an accordion and Ken Mooney's ooo-la-la hotel room set (not to mention a café table, a doctor's waiting room

and office) transport us to Paris in the blink of an eye. But it's the wonderful Boston accents used by Duncan Rogers and Bev Sheehan, Mickey and Jean respectively, that remind us that they are low-lifes from Southie. Well, maybe Jean isn't a criminal, but she's spend her entire adult life with Mickey (even when he was married to other women) so she's never shed her underworld roots. Rogers is as jumpy as a grasshopper as Mickey; being on the run has really gotten to him. Sheehan's Jean is long suffering and a bit bewildered as to how her bad choices landed her in this fix. So much togetherness has gotten old, and she

longs for another kind of life. That's why she's so open to advances made by Bobby, played with appropriate nerdiness by Oliver Wadsworth (above left). He does triple duty too: as an officious Dr. Shockley ordering Mickey to lose weight and a hilarious drag queen named Tinsel (far right) who's come to collect “her” fee for an encounter with Mickey in a nightclub.

The plot of The Last Days of Mickey and Jean takes multiple turns, but I won't spoil the fun experienced by the audience (and the consternation felt by the characters) as secrets are revealed and people are double-crossed. The weakest scene is the one where Mickey coerces Jean to take a pill as part of a suicide pact. She acquiesces too quickly to be believable, and each betrays the other so quickly that the audience is never aware of the deception.

The Last Days of Mickey and Jean was inspired by the recent arrest of fugitive Boston criminal Whitey Bulger and his longtime girlfriend, apprehended this past June in Santa Monica, California, where they had been hiding for the past 16 years. There, they lived relatively "normal" existences, cutting off all contacts with their previous lives and keeping a low profile. Like Bulger, Mickey has a $2 million price on his head; just who gets the reward is perhaps the most delicious moment of the play's ninety minutes on the Bickford Theatre stage.

The Last Days of Mickey and Jean may not be high art, but it is the type of comedy Richard Dresser does so well: unlikely protagonists who, despite their personality flaws, are sympathetic characters who entertain us while giving us important concepts to consider. With an accomplished cast under the skilled directorial hand of John Pietrowski, it doesn't get much better than that.

The Last Days of Mickey and Jean will be performed Thursdays at 7:30 PM, Fridays and Saturdays at 8 PM, and Saturdays and Sundays at 2 PM at the Bickford Theatre at the Morris Museum, 6 Normandy Heights Road, Morristown. For information and tickets, call the box office at 973.971.3706 or visit online at www.bickfordtheatre.org.