DREAMCATCHER REPERTORY THEATRE, professional Theatre in Residence at the Baird Center in South Orange, opens its seventeenth season with its improvisational comedy troupe

WHEN: Saturday, September 17, 8 PM
WHERE: The Baird Center in Meadowland Park, a few blocks from the center of downtown South Orange.
TICKETS: $15
To purchase tickets in advance, go to www.dreamcatcherrep.org or call Brown Paper Tickets at 800.838.3006.

This unpredictable evening is a great way to kick off the fall and is packed with laughs from start to finish.

MULTIPLE PERSONALITY DISORDER features a cast of Dreamcatcher regulars, including Clark Carmichael, Harry Patrick Christian, Laura Ekstrand, Noreen Farley, Dave Maulbeck, and Jessica O’Hara-Baker.  The troupe is directed by Maulbeck, who is now appearing at the Magnet Theatre in New York with a variety of improv and sketch comedy groups. 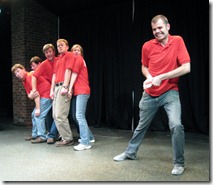 The show includes improvisational comedy sketches that use audience suggestions to shape the scenes that the actors instantly create onstage.  Performers use ingredients such as everyday objects, strange maladies, and unusual circumstances to cook up unconventional mini-plays that appear and disappear in a matter of minutes.  The troupe’s previous performances have featured Sumo wrestlers, pterodactyls, and people who think they are fish, among other unusual characters.