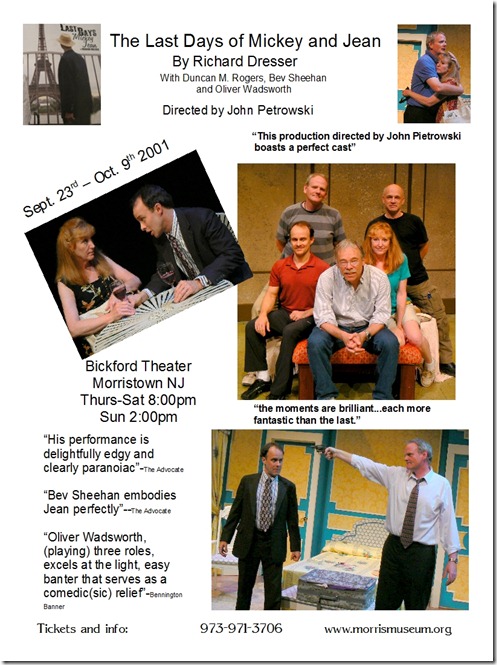 It's love on the lam in this NJ Premiere of a new comedy by Richard Dresser (Rounding Third)! When Mickey, a fugitive mobster from Boston, is forced into early retirement in Paris with his no-longer-young girlfriend, Jean, the couple runs into one hilarious situation after another-and discover shocking secrets about each other along the way. With its funny perspective on unconventional love and loyalty,The Last Days of Mickey & Jean is a retirement story with a twist!

This production premiered last month at Oldcastle Theatre in Bennington, VT, and The Berkshire Advocate said it is “wonderful work and should be seen to be appreciated.” The Bennington Banner said that Bev “Sheehan is a delight to watch on stage,” that Duncan “Rogers delivers a stellar performance,” and that Oliver Wadsworth, in the “task of playing three roles, among them a doctor and a drag queen… excel[s] as comedic relief and allows the audience to look at the complicated humanity underneath the exterior of the characters.”

“We are very excited to be co-presenting this very funny and endearing play with The Bickford and Oldcastle Theatre,” said John Pietrowski. “If the audience response in Vermont is any indication, New Jersey audiences will have a great evening of theatre. Playwrights audiences will recognize Richard Dresser’s work from our production of Augusta two years ago and The Bickford’s will remember Rounding Third, directed by none other than Duncan Rogers. We’ve been wanting to collaborate with The Bickford for some time, now, and this play is a perfect fit for both of our audiences.”

“It’s exciting to continue the mission of the Bickford of ‘giving second life to plays’ with this co-production and NJ Premiere of this fun comedy by Mr. Dresser,” said Eric Hafen, Artistic Director of Bickford Theatre.