Once upon a time in Hollywood, homosexual actors lived in fear of being “outed” by the gossip columnists and photographers in fan magazines and newspapers, thus being denied the juicy roles, their fans’ adoration and the chance at lucrative careers. They lived circumspect, circumscribed lives, some even going so far as to marry unsuspecting women, to employ their male lovers as “personal assistants and to drive their agents to distraction at the thought of discovery. It may sound “quaint” to us today, but back in the fifties and sixties, it was serious business.

This is the central situation of Douglas Carter Beane’s play The Little Dog Laughed, produced by The Bickford Theatre as part of their series taking a look behind the making of films (initiated last fall by a similar exhibit at the Morris Museum). Originally written as an extended monologue for the agent Diane and fleshed out by Beane when that was so successful, the play ricochets from monologues performed by each of the four actors to scenes performed by at least two at a time, on a serviceable set designed by Jim Bazewicz and lit by Abby Hoke-Brady.

As in his mordantly funny As Bees in Honey Drown, Beane satirizes Hollywood’s ability to deceive itself and the lengths to which the industry will go to preserve its profits, even at the cost of its morals and ethics. In this milieu, actors aren’t people; they are commodities to be bought and sold—and to sell to the adoring public a bill of goods that’s very different from the truth. 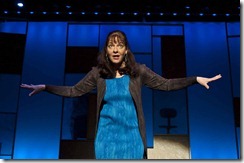 Matinee idol Matthew Green, the proverbial “boy next door,” has come with his hard-driving agent Diane to New York City for an awards cere-mony. Afterwards, to celebrate his win, Matthew gets drunk and calls a male escort service for some “com-pany.” He’s so drunk that nothing sexual happens, but upon awaken-ing, he’s so taken with boy-toy Alex that they make plans to get together, much to Diane’s dismay, for she’s in the middle of tough negotiations with a gay playwright for his hit Broadway play to be made into a film, starring her client. When Diane returns to Hollywood, Matthew remains behind in New York to spend quality time with Alex. Complicating matters is the friends-with-benefits thing between Alex and party girl Ellen, the outcome of which brings about a denouement that’s sad and happy at the same time.

Eric Hafen’s sluggish direction takes the bite out of Beane’s crisp, satiric dialogue. Liz Zazzi’s Diane starts off the performance with a nifty riff on film beginnings and another one about celebrities ordering a salad, and there’s a sharp, funny scene where she and her client pitch their idea to the playwright. As Beane writes the dialogue, it’s a classic blueprint for a snow job. But Zazzi loses steam in subsequent monologues, which is too bad, for she’s an accomplished actress. 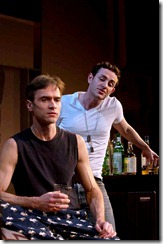 It’s the casting of the two men where the play falters. Matthew is supposed to be a matinee idol-type—think Tab Hunter or Rock Hudson, two closeted hunks of fifties romantic films—but Mark Irish (left) is too short and stringy to be convincing. Ditto Scott Tyler as Alex (right); he’s neither young enough nor drop-dead “mag-nificent” (as one of his tricks calls him) enough to make us believe that Matthew falls for him at first sober glance. The two struggle mightily with the dialogue, but it never feels or sounds natu-ral. In fact, I expected the play (and its ending) to be sadder, which would make the satire even sharper.

As Ellen, Cindy Fernandez isn’t sexy enough to make us believe that she’s the paramour of a famous author (whom we never see). She’s rather whiny and not very sympathetic.

Much of our impressions of these four disagreeable characters are colored by the costumes, designed by Alysson Shapiro. The women wear loud, tasteless apparel completely unsuited to their characters. Diane’s fluorescent green tank top and shoes, bright yellow jacket and long turquoise dress look dowdy and unprofessional. No reputable female Hollywood power agent would appear for a meeting dressed so garishly and casually; she’d wear a well-tailored business suit, preferably black, with a white blouse and black pumps. And Ellen’s leggings, tight sweater dress and ugly red jumper scream teeny-bopper more than 24-year-old sophisticate on the prowl. If she can use her former lover’s credit card to shop at Jeffrey’s (a trendy store in NYC), then she should look more put together.

Douglas Carter Beane’s sharp dialogue calls for sharp performances. Unfortunately, the Bickford’s production of The Little Dog Laughed (you’ll find out the meaning of the title by the end of the play) is deficient in that area. And although attitudes toward gays appears to have changed in the 60 years since Tab Hunter and Rock Hudson had to hide in the closet, I fear that The Bickford’s target audience might not be ready for the frank talk Beane is selling. A fair number of people did not return after intermission. Perhaps with snappier direction, razor-sharp delivery and believable performances, Beane’s point would elicit a more sympathetic understanding and push us to look at our own prejudices about the knotty question of whether audiences will accept a gay man playing a straight role as easily as they tolerate a straight man playing a homosexual.

The Little Dog Laughed will be performed Thursday, January 27, at 7:30 PM; Fridays and Saturdays at 8 PM; Thursdays, February 3 and 10 at 2 PM; and Sundays at 2 PM through February 13. There is no performance on Saturday, January 29. For tickets and information, call the box office at 973.971.3706 or visit online at www.bickfordtheatre.org. The Bickford Theatre is located in the Morris Museum and offers free parking and full accessibility. The Museum is at 6 Normandy Heights Parkway in Morristown.