If Myla Goldberg’s 2000 first novel Bee Season osto be taken at face value, children who win spelling bees are highly regarded by their parents, some of whom go to great lengths to advance their talented offspring up the ladder to acclaim at state and national levels. Such parents often become very involved, drilling the child with long lists of obscure words and helping him/her devise and use techniques to help visualize the word—all to avoid the dreaded Second Place spot at the end of the competition.

A whiff of such parents and techniques wafts over the Paper Mill Playhouse's smashing production of The 25th Annual Putnam County Spelling Bee, but the show's honesty and humor lets us focus on the strength and character of each contestant, to everyone's delight.

I once took my four-year-old granddaughter to a Paper Mill production for children when she wisely (and in sotto voce) announced, "Meema, those are adults pretending to be children." Well, it didn't seem to bother her a whit, nor does it here in this production, that's how convincing the actors are. No, they don't look like kids, but they act/sing/dance like middle school students with great verve and energy.

If you've ever been in (or attended) a spelling bee, you know they can be deadly for the audience and nerve-wracking for the contestants. The play's plot is very straightforward: each contestant is given a word to spell and if successful, gets to sit down and try again, and again, and again until one is left, declared the winner and sent on to Nationals. However, the back stories hinted at by Ms. Peretti and enacted by each character (aided by other actors) makes this more than just a spelling competition. We really get to know and care for these kids.

Ephie Aardema is adorable as Loginanne Schwartzandgrubenierre (she really looks 12), president of the Gay-Straight Alliance at her elementary school, with twin pigtails, a lisp and two dads who desperately want her to win. Her plaintive query, "What about me," hits the theme of identity so important to kids at this age. Lyle Colby Mackston's home-schooled Leaf Coneybear clearly loves to spell (as much as he loves his curly hair and his sneakers with wheels) and is winning as he "skates" around the stage and puts to lie the idea that he's not that bright. Olivia Oguma as Asian student Marcy Park (right), who skipped fourth and fifth grades and who displays an over-weening (and obnoxious) assurance that she will win (her mother is probably Amy Chua, Battle Hymn of the Tiger Mother), spits out the correct letters at breakneck speed. And Brandon Yanez is very funny as last year's arrogant and over-confident winner, Chip Tolentino, whose pubertal longings ultimately embarrass him.

Will Blum (left) is especially endearing as obnoxious William Barfée (Bar-fay, not Bar-fee) who uses his Magic Foot to trace the words on the floor before spelling them. In his shorts, sneakers and odd haircut, he's funny-looking, but his mother thinks he's "handsome"! His nemesis, Olive Ostrovsky loves words so much that she read the dictionary for fun—while sitting on the toilet! She is portrayed by Ali Stroker (right) with great assurance and style, in a wheelchair. She sings, she dances, she acts as well as the other talented young actors, all while sitting down! It's really terrific that director Marc Bruni tweaked the show to accommodate her disability so she could show us her performance skill.

Marla Mindell's Rona Lisa Peretti is the Mistress of Ceremonies, forever reminding the kids and the audience that she is a previous winner (her word: syzygy). She rolls her r's mightily and recites outlandish details about each contestant with a straight face. David Volin as Vice Principal Panch uses each word in a hilarious sentence, much to the audience's merriment. And as Mitch Mahoney, on parole and performing community service by keeping everyone in line, Jerold E. Solomon's rendition of "Prayer of the Comfort Counselor" shows off his magnificent voice; he folds up a chair and offers a juice box to a departing contestant with dignity.

Did I mention that this is a musical production, complete with singing and lots of dancing? Director Marc Bruni keeps matters tootling along at a brisk pace without the production's feeling rushed. Wendy Seyb's choreography and Andi Einhorn's musical direction give each number a special, original feel. And Anna Louizos' set (a terrific school gymnasium), Alejo Vietti's appropriate and colorful costumes and David Lander's atmospheric lighting enhance and bring to life what could be rather dull goings on.

Anyone who's ever competed in a spelling bee will tell you that it is an unforgettable experience. I know, for in seventh grade I came in second, having misspelled "parallel." Now, whenever I write that word, I am 12 years old once again, and I have never forgotten the correct spelling. Darn those double l's in the middle of the word!

In his State of the Union Speech, President Obama asked us to see that our kids revere the winner of the Science Fair as much as they do the athlete. I add "the winner of the Spelling Bee" to that directive. Take your kids (11 and up) to see this adorable show. That should turn 'em on to being smart! Oh, and as a retired English teacher, I give The 25th Annual Putnam County Spelling Bee an A+.

The 25th Annual Putnam County Spelling Bee will be performed at the Paper Mill Playhouse in Millburn through February 13, Wednesdays and Thursdays at 7:30 PM; Fridays and Saturdays at 8 PM; Sundays at 7:00 PM; Thursdays, Saturdays and Sundays at 1:30 PM. For tickets, call the box office at 973.376.4343 or visit online at www.papermill.org. 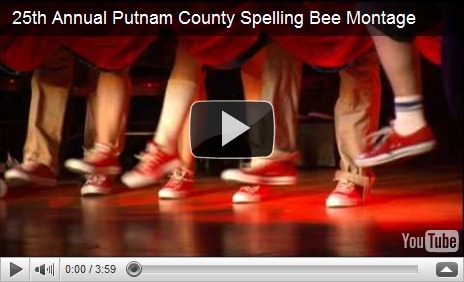